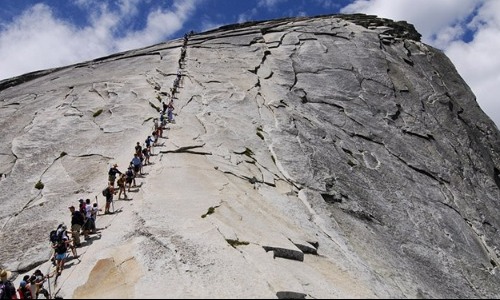 This massive natural rock formation located in Yosemite is called the half-dome because of its shape. But it’s so deadly that over 60 people have died trying to scale up the 5000 feet mountain! It takes an entire day to trek and requires tourists to cling onto cables to balance and support themselves.

The problem comes when it starts raining. The cables become very slippery, and so do the rocks. But serious accidents and deaths don’t only happen during the rains. There is a particularly dangerous section in the half dome that’s been aptly named ‘death slabs’!

And that’s not all, the final 400 ft of the trek is practically totally vertical! Imagine climbing up over slippery rocks at an almost 90-degree angle. A recipe for disaster, for sure.